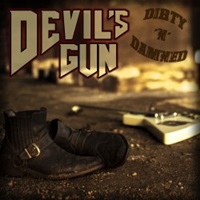 From the southern part of Sweden, Devil’s Gun is a five-piece outfit that bring the spirit of traditional metal and hard rock to the masses on their debut full-length "Dirty ‘N’ Damned". Rough, gritty vocals and catchy, bluesy-oriented heavy riffs puts the band in a similar class as Airbourne, Accept, and possibly mentors like Bullet that live for that down to earth catchiness in vocals as well as musical construction. The title cut has a lot of Dokken-like qualities in terms of the picking/riff choices, while "Hot Rock City" and "Wasted" are adrenaline-oriented numbers sure to maximize headbanging and air simulation maneuvers from the stage.

11 songs in 33 minutes keeps Devil’s Gun material focused, instantaneous, and on point – if there happens to be a track you don’t prefer, it flies by within 3 minutes or less. Vocalist Joakim Hermansson has one of those whiskey soaked roars that is raspy- which can be perfect for some and irritating for others, again promoting a lot of Brian Johnson meets Udo comparisons. Together since 2012, the band seem determined to keep the old school scene alive, and "Dirty ‘N’ Damned" contains a lot of that Teutonic stomp and Aussie spunk necessary to get the hordes clapping and screaming in unison.

Favorites include the motorcycle, bass fueled "Spitfire" and Accept-ish "Radio Attack", the latter being a perfect addition for the "Breaker" album with its guitar hook and shriek screams. A great start- Devil’s Gun won’t be considered the most original band to come out of Sweden, but what they are good at is writing strong songs that are catchy and effective.