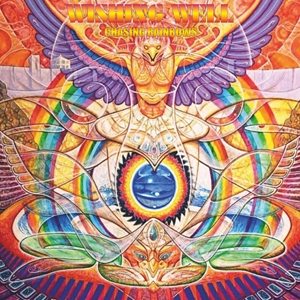 Finnish hard rock band Wishing Well recorded this album "Chasing Rainbows" over 10 studio days in the late summer to early fall of 2015 – going in well-rehearsed as to maximize the output. Expanding to a quartet after the recording of the album (guitarist Anssi Korkiakoski also played bass on the record), this is another ideal effort for those who miss occasional use of slide guitars, bluesy melodies, and classic hard rock/ metal riffs with solid tempos.

Occasionally firing up the adrenaline meter through faster double bass and volatile fills for "Science Fiction", drummer Rip Radioactive proves he’s not a one-trick pony, allowing vocalist Peter James Goodman to belt out some magnetic mid-range notes in Rainbow meets Deep Purple fashion. This band excels at the fine art of writing diverse material in the parameters set forth – leaning towards the doom side for "Sacrifice" and then turning on a dime for a more uplifting, guitar/ keyboard infused "Luck Is Blind" follow up. Even when the band choose to go the ballad route for the closing "Fire in My Soul", there’s a bluesy, deeper tinge to the whole arrangement and a spirited acoustic break that touches your innermost thoughts and feelings – Peter again using restraint in the verses to wrench out every last tender emotion possible.

Ex-Rainbow Graham Bonnet lends his vocal talent to "Hippie Heart Gypsy Soul" – getting Wishing Well’s foot in the proverbial door, but what’s interesting is the band’s skills are high enough that they don’t need that star power to get on the grid. Add in a very colorful front artwork that seems more organic and hand painted than computer generated and it’s easy to see we don’t have a modern band before us. In the end, these 9 songs provide Wishing Well and their listeners a boatload of good times, especially for those that miss classic hard rock from an older perspective.