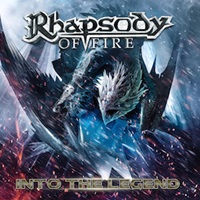 Describing their style at this point as film score metal, Italy’s Rhapsody of Fire no longer need worry about establishing their following after main guitarist Luca Turilli left in 2011 to begin his own version with new members. When you have keyboardist Alex Staropoli and singer Fabio Lione in your corner, you’ll not only survive – you’ll prove to the world that you can stand on your history while creating new records for the world to savor. "Into the Legend" is their latest album, a 10 track, 66-minute odyssey into their brand of cinematic power/ symphonic metal that features all of the bombastic whistles, choirs, and harmony aspects we’ve come to expect.

The speedy "Distant Sky" should get the throngs into sing-a-long mode, guitarist Roberto De Micheli throwing down some slower, classical infused arpeggios amidst his normal shred-worthy spots while drummer Alex Holzwarth slams his kit for all its worth. Throwing in some folk/cultural tinges into the follow up title cut, the choir parts carrying the lightning battle mood shift as Fabio effortlessly goes up and down his prime time register, falsettos never a struggle for his pipes. The band know at this point in the game they can’t whirl about purely at speed of light tempos: diversity allowing for a more well-rounded effort, as the epic "Winter’s Rain", and softer ballad "Shining Star" illustrate here. Ending the album on the 16:45 "The Kiss of Light", Rhapsody of Fire throw all atmospheric, bombast, and cinematic parts on here, from the serene symphonic intro to a more mid-tempo Staropoli keyboard riff, the acoustic transition around the six-minute mark all the way through to a slightly progressive instrumental break where guitars and keyboards become syncopation weapons in aural unity.

"Into the Legend" has a little warmer production than their previous "Dark Wings of Steel", which overall didn’t impress these ears. I feel like the band are moving in a better songwriting direction this time, and should have no trouble appeasing their fervent fan base.