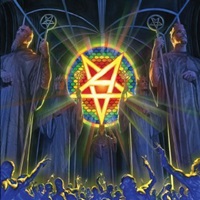 ANTHRAX – For All Kings

At this point one of the established big four in the thrash world, Anthrax can pretty much go in any direction they desire and know that they’ll have a certain fan base that will buy into the product immediately. Fortunate to unleash a killer ‘comeback’ with Joey Belladonna the last time around through "Worship Music", anticipation for this follow up is on high. "For All Kings" features new lead guitarist Jon Donais (of Shadows Fall notoriety), and is a prime example of the band’s professionalism and strong nature to keep up with the times without forsaking the melodic/ hook trademarks that are quintessential to their thrash platform.

"You Gotta Believe" establishes their up tempo, heads down riffing that they’ve been doing since their 1980’s early Megaforce days, Scott Ian setting the razor sharp, bulldozer speed template through his precision guitar parts while Joey uses all aspects of his powerhouse vocal range to bring home the chorus ‘Impaled- the holy grail – you gotta believe – you gotta believe in me’. Commercial aspects of course come in on "Breathing Lightning" through the use of a softer, clean opening which then is built upon through the stop/start drumming and a crunch mid-tempo riff that wouldn’t be that out of place during the "Madhouse" / "Spreading the Disease" days. First single "Evil Twin" signaled that even as a band’s core members are striding through their 50’s, it doesn’t mean that they’ve lost any of their viciousness or aggression necessary to still be important in the metal scene.

Frankie Bello’s bass importance rides through "All of Them Thieves" – as well as drummer Charlie Benante’s impeccable sense for the right tempo, the right fill work, and fluctuating between fast passages and groove oriented material without missing a beat. Joey Belladonna proves he needs to be fronting Anthrax until they decide to retire – classy, clear, convincing, and melodic throughout. A worthy follow up to "Worship Music", Anthrax appears content to give the fans what they desire … a little bit of an 80’s throwback while using the experience and seasoning to appeal to a modern audience.