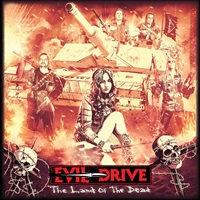 EVIL DRIVE – The Land of the Drive

Finnish band Evil Drive possess an interesting visual promo on their bio sheet – singer Viktoria Viren flanked by her four musician compatriots in gas mask/military attire, ready for war. A couple of different descriptions musically come to mind when taking in this full-length album "The Land of the Drive" – the first for the band founded in 2013 and previously releasing a self-titled EP that same year. Expect a vicious harsh vocal attack from Viktoria while the music contains more of the melodic aspects in terms of hooks and harmonies – wrapped around a power/thrash/death base.

In other words, you can expect everything from Megadeth and Stone to Children of Bodom and Anthrax, plus a little bit of W.A.S.P. for good measure when taking in winning cuts like "Screaming Soul", the stop/ start monster "World Cleaners" and dramatic killer "Lost Forever". Gallop-oriented riffing and keyboard accents make the six-minute "Killer is Following You" the ideal ender, a lot of the trailing riffs from Ville Wiren and Niko Huusari plus the clean instrumental section gives off an "Orion"/ Metallica-era cultural element.

The 9 songs in the main clock in at a vinyl friendly 40 minutes, making Evil Drive very easy to rotate on a continuous loop if desired – and this journalist figures that could happen often. Probable to gain more appeal through the underground ranks because of Viktoria’s harsh screams and torturous vo-kills (very Arch Enemy inspired), "The Land of the Drive" is song-oriented enough to put the band on a lot of killer bills and tours.