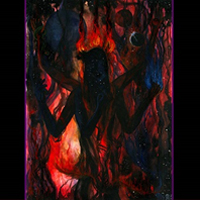 "SALIGIA" is a mnemonic based on the first letters in Latin of the seven deadly sins: superbia, avaritia, luxuria, invidia, gula, ira, acedia. This 2 piece comes from Trondheim and features Dodsengel activist Ahzari on everything except percussion. This is the band’s second full-length release and although I haven’t heard their other material, I believe it represents a less ‘second wave’ approach to what the band may have put out before.

In terms of style, Fonix is black metal to the hilt, but the approach has many features that differentiate it from the norm. First up are the vocals. Much of these are clean, although they still have all the anguish and ritual fervour we could wish for. At first listen they are slightly reminiscent of Big Boss from Root, until you become used to them and you realise how much is going on and how original they actually are. One thing is for sure – they totally elevate the songs and play a strong part in contributing to the atmosphere of this record. The songs are generally long – up around the 8 minute mark and take the listener on a journey made up of ethereally layered instruments overlaid by fairly direct and simple guitar lines and melodies. It is a devastating success! The tempos change frequently, with plenty of build up leading to faster passages which favour a rapid skank beat above more traditional blasting techniques.

This is utterly modern black metal that successfully references all the influences that lead us to where we are today to create a whole that feels fresh and new and yet has retro appeal. This record works on the head and the heart. Pure class.

EVIL DRIVE – The Land of the Drive