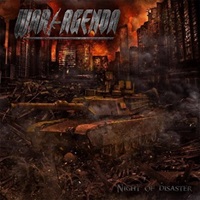 Forming in 2012, German thrash band War Agenda on their full-length debut album "Night of Disaster" appear to possess the perfect blend of Bay Area passion and East Coast crossover elements through these 10 songs. Gang vocals, up tempo rhythms, spitfire, acidic melodies, and the crunch mid-tempo transitions that create cyclones out of small winds in the pit are the tools of the trade. Exodus-ish riffing circa "Pleasures of the Flesh" era penetrates "Sentenced" while the dual vocals give off more of a Nuclear Assault meets S.O.D. East Coast feel.

Rarely reaching hyper speed, the group prefer to accent slower mid-tempo material such as "Destiny of a Mad Man" with the right closing harmony chimes that Slayer made famous- drummer Hamdi being very straightforward and using double bass in all the right spots and the chorus has that same rhythmic choppy quality as Kreator’s "Terrible Certainty". Thick production plus killer tones make the 10 songs go down comfortably – and I would imagine these songs are even heavier when performed live.

Old school thrash metal with renewed enthusiasm – it’s hard to dispute that claim through their Facebook page, as I found myself banging away and simulating a lot of the riff action as it roared through my speakers. War Agenda could be a band to watch down the line, as "Night of Disaster" is a semi-technical, harmonic/melody driven effort that should appeal to the majority deeply embedded in this genre.