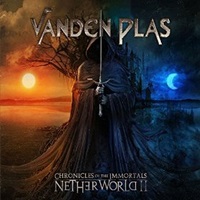 Risk can gain reward in the progressive metal genre – especially evident on this go-around for the German group Vanden Plas. "Chronicles of the Immortals: Netherworld II" obviously finishes the previous record’s concept from last year, an apocalyptic battle between good and evil. The 9 tracks (Visions 11-19 in the story line) span the range of the quintet’s style, dynamically moving from more melodic fare that can contain theatrical / choir elements for "In My Universe" or musically heightening all senses from somber keyboard tranquility to bombast electricity for the 7:49 "The Last Fight".

A lot of the sci-fi bells and whistles fall into the hands of vocalist Andy Kuntz to convincingly deliver the words with proper intention and inflection as well as keyboardist Günter Werno with his swirling tones and computer technology at his disposal. Drummer Andreas Lill flexes his percussion fill skills at the conclusion of "Godmaker’s Temptation", while the surging keyboard/guitar syncopation drives the follow up "Stone Roses" into one of my favorite Vanden Plas songs in quite some time. The best progressive metal records give pause for reflection and also require multiple sit downs to truly understand all the layers contained within – "Chronicles of the Immortals: Netherworld II" succeeds on both fronts because the musicianship is killer while not overtly intricate and technical all the time. Even when elements of Deep Purple circa "Perfect Strangers" come up for one of the main riffs to "Monster", you never think it’s anything but paying proper respect and homage to innovators that influence the group’s outlook on creativity.

The centerpiece of the album of course is the 13:43 "Blood of Eden", Julia Steinglass supplying additional female vocals while the song traverses an 80’s ballad-oriented start before a speedier electric transition kicks in, the twists and turns of the arrangement giving a lot of leeway for some musical interplay for Günter and guitarist Stephan Lill. Gorgeous attention to detail keeps my ears piqued from beginning to end – not an easy task on a 68-minute record, that’s for sure.

In the end, the band properly executed a two-part saga over two years that should keep Vanden Plas on high regard with their long-time followers, while hopefully gaining a new found audience who appreciates the time, effort, and energy that went into this.