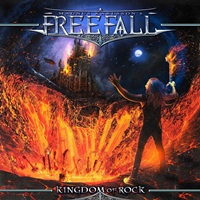 Primal Fear guitarist Magnus Karlsson returns with his second solo project record "Kingdom of Rock". Much like the self-titled predecessor from 2013, assembling a host of talented hard rock/metal musicians makes this 11 song effort inviting, enticing, and exhilarating. Highlights are numerous: Jorn Lande through his golden, bluesy range on the title cut, The Poodles’ Jakob Samuel soaring with his gritty melodic rock comfort on the follow up "Out of the Dark", as well as "Never Look Away" where TNT’s Tony Harnell resonates in that falsetto familiarity that put his voice on the map in the 1980’s.

Magnus’ guitar playing is tasteful, diverse, and certainly fits the melodic hard rock/ metal mold – proving that the best material often contains flashes of brilliance, but all safely molded in the context of focused hooks and choruses that you can sing for weeks on end. Be it the Ozzy meets Sykes-era Whitesnake like "A Heart So Cold" or the more Black Sabbath-oriented epic "When the Sky Falls" (not surprisingly finding Tony Martin on vocals), Mr. Karlsson asserts himself appropriately through the right chord combinations and dynamic peaks, building the material for long term appreciation. The mix of anthems, melodic hard rock numbers and power efforts should allow a diverse cross section of fans to hear their musical heroes in the best framework possible.

When given the right tools and talent, the outcome can be stunning. Magnus Karlsson’s Free Fall two albums in has given the world more than enough reason to keep buying new records and understand that even if this isn’t the 1980’s, there are still songs to be written, performed, and delivered to the public in 2015 and beyond. Another winner here.

UN – The Tomb of All Things