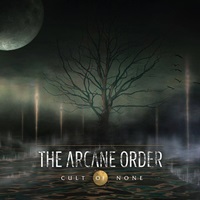 THE ARCANE ORDER – Cult of None

While it’s been seven years between albums, the members of The Arcane Order haven’t been resting on their laurels during their self-imposed hiatus. Drummer Morten Løwe Sørensen is in Amaranthe, while guitarist Kasper Kirkegaard does live touring with Hatesphere and vocalist Kasper Thomsen also was involved in Raunchy. Now that you are caught up to speed, let’s take a closer look at the third album "Cult of None".

The quartet’s outlook contains a sonic explosion for the melodic death/thrash genres – although nuances of even black metal do appear from time to time. Epic length arrangements are the norm, allowing intriguing instrumental build ups between the musicians during the 7:12 "Ahab" as well as the Nevermore meets early Mercenary-like "Hesperian". A lot of the lead work has this emotive placement, forethought takes place in the heart of Flemming C. Lund during the almost 10 minute "Reviver" as well as the brilliantly provocative "Waves of Trance" where he used arpeggio sweeps and tapping aspects to elevate the intensity and feel. Morten gains the chance to really flex more of his heavier speed/double bass chops throughout, and Kasper’s roar could cause the weak to cower if not prepared for his intensity ("Faith Eater" one of his best deliveries for "Cult of None").

Think everything from Strapping Young Lad and mid-period In Flames ("Whoracle" through "Clayman") against the heavier sheen of Nevermore and Mercenary and I think that will give you some idea into The Arcane Order’s sound. Producer Jacob Hansen gives the band the necessary crushing tones and mix for clarities sake without sacrificing The Arcane Order’s sonic excellence – sharp and in your face.

Recently announcing Kasper’s departure from not only the band but the music business itself on their Facebook page, we’ll see how the shift in singers changes the lineup output for the future. "Cult of None" should satisfy all fans of the group and hopefully gain new converts to the fold.

CRIMSON DAY – Order of the Shadows