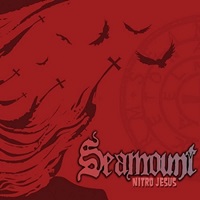 Forming in 2007, the international act Seamount is a collaborative force between German guitarist Tim Schmidt and American singer Phil Swanson. Bassist Markus Stroehlein and drummer Jens Hoffmann round out the quartet, and "Nitro Jesus" is the group’s fifth album in their career – although my first sojourn into their dark doom/heavy metal ways. Safe to say based on copious listening sessions for these 9 songs it will be essential for this journalist to seek out more of the band’s discography, as there is a hypnotic quality to the heavy riffs, solid grooves, and unique melodies on display.

The subtle guitar chugging that penetrates "Scars of the Emotional Stuntman", the quieter, echoing keyboard refrain that volleys against more of a fierce mountain top melody pattern vocally during "Bestial Rising", or slightly more anthem-oriented "Beautiful Sadness" give Seamount dynamic diversity within a platform that has often been accused of being too one-dimensional. Love the use of sound clips and sirens for the rather energetic "In the End", a number that has a lot of Trouble meets The Ramones textures, although Phil’s emphatic lower bark drives against the faster Schmidt chord progressions to just build the song organically.

It’s tough to place Seamount in a particular niche or category – as these songs run the gamut from heavy doom rock to straightforward metal. The band doesn’t always feel the need to blow away your ears in feedback or distortion- the closing "No One Knows" penetrating through piano parts, lower, serene guitar play and Phil’s softer yet equally effective talk/moan nature (reminds me of The Cars believe it or not). As a result, "Nitro Jesus" can be one of those head-turners because deeper listens give you even more understanding – and that’s the way the best albums should work.

Now it’s time for me to invest in some of their back catalog.

THE ARCANE ORDER – Cult of None