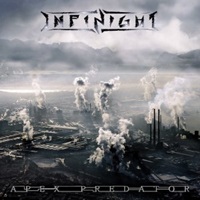 At almost 15 years into their career, German power metal band InfiNight remain steadfast in bringing their music to the people on a DIY basis. "Apex Predator" is the quintet’s third full-length for a lineup that has had no membership changes since their 2001 beginnings – highly unusual in today’s marketplace. The 11 songs on this platter deliver crisp, catchy riffs, solid in the pocket tempos and vocals from Martin Klein that are 100% true, clear, and commanding.

From "Council of Fools" to the almost nine-minute twister "Beyond the Apex", InfiNight straddle the lines of US power/thrash, as acts like Metal Church, Hittman, and Fifth Angel come to mind on this record. Martin’s voice is a dead ringer for Zak Stevens, soaring to the heavens right away within the first minute of the title track. Guitarists Dominique Raber and Marco Grewenig complement each other wonderfully, filling in all the sonic layers while being very energetic and engaging during the instrumental sections and lead breaks throughout. Understand that as a self-released product some of the production values are a touch rawer and primitive, but that doesn’t mean you won’t make out all the instruments – and hints at a realism that a lot of power metal bands forget about.

Not enough bands are willing to explore that late 80’s US power metal sound that developed I feel as a result of the efforts of Priest, Maiden, and Queensrÿche. Infinight can carve out a niche audience to fill that gap, as "Apex Predator" contains an excellent selection of diverse arrangements that can satiate those tastes.