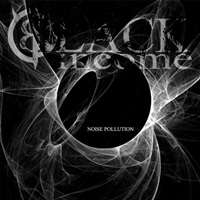 It’s amazing to me how other countries can take a form of music that developed in the Northwestern United States like alternative grunge music and make it their own. Together since 2012, Danish act Black Income take a modest amount of inspiration from Alice in Chains and Soundgarden, while throwing in a bit of that stoner/ fuzz rock vibe that put Queens of the Stone Age and Fu Manchu in the spotlight during the 1990’s as well for their debut album "Noise Pollution".

You’ll get 12 songs captured in an hour long format, where the band instrumentally hone in on a few key riffs and find ways to groove them into your brain- while the vocal melodies sure do possess a lot of old Layne Staley qualities. Henrik Thrane and Philip Jensen lay down a thick main guitar template, offering cleaner dynamic contrast often during the verses or instrumental sections of key tracks like "Left You Alone" and "Hate to Say It". Certain tracks settle into that cruising groove that makes you roll the windows down and let the wind rip through your hair ("Let You Down"), while other cuts have more of an atmospheric veneer as the licks swirl about to gain a moodier feel (the title track).

There’s no denying the band understand the genres at hand, and engage in a sound that is clearly heavy, melodic, but musically satisfying. Even when there are commercial tinges for the vocal harmonies or obvious Stone Temple Pilots like hooks (opener "You Can’t Overcome" especially through bassist Kenneth Smedemark’s pulsating low end work), Black Income doesn’t mire themselves in being too obvious, letting the composition unfold and musical interplay take its course.

Addictive, respectful, and yet not totally a throwback to the 90’s, "Noise Pollution" should get a buzz going quickly for Black Income – and hopefully some long touring runs as these tracks are ready for stage volume consumption.