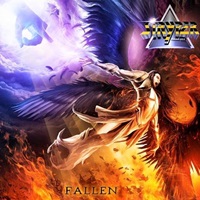 A resurrection of sorts has helped Stryper gain a second career boost, proving that the yellow and black attack has the chops, skills, and songwriting to maintain a following in 2015. "Fallen" is their latest studio album, another 12 song odyssey into their traditional, melodic positive metal platform that has been their niche from the start. Guitarist/ vocalist Michael Sweet soars to the heavens right out of the gate on the outstanding opener "Yahweh", and it’s quite a wonder that paned glass isn’t shattering around him from certain screams he achieves throughout the record (check out the beginning salvo for the title track).

More in your face, natural tones give this material a lively punch, especially in terms of the guitar sound Sweet and Oz fox achieve – reaching back into their early roots of 70’s/ 80’s influences for the mid-tempo "Love You Like I Do" or the more fast paced, quick hitting "Till I Get What I Need". The rich, multi-part vocal harmonies bring a lot of the hooks home, as the band this deep into their style know what the fans hope for out of these songs and there’s no holding back in that department. The exotic marching runs throughout "Let There Be Light" gain more clarity through bassist Tim Gaines equally entertaining low end spots, straight out of the Rainbow meets Led Zeppelin catalog of tricks.

Another strong effort in their discography, it’s hard to top "Soldiers Under Command" or "To Hell With the Devil", but for the current marketplace, "Fallen" stacks up as a solid melodic heavy metal album to raise your fists and bang your head to.