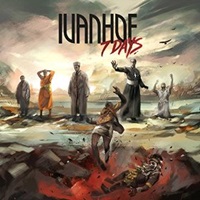 In the early 1990’s I remember hearing about this band from a German pen pal friend who on a pilgrimage to visit some US bands brought their debut album for everyone to enjoy. Andy B. Franck (Brainstorm) was the singer at the time, and this progressive metal band has some impressive Dream Theater meets Queensrÿche passages to their arrangements. Flash forward to 2015- "7 Days" is the band’s seventh album, Alexander Koch is the new vocalist, and only bassist Giovanni Soulas and guitarist Chuck Schuler remain from Ivanhoe’s early days. They haven’t strayed far from their progressive niche, but somehow these 11 tracks (digipack owners get 12) miss the mark in terms of uplifting hooks and performances.

The tone of this record has a slower, modern vibe that can be darker and a touch mechanized – right out of the gate on the instrumental "Alone" it sets up a layered approach that gives way to something one would expect from the Seattle/ alternative scene if meeting up with progressive ideas. Alexander’s impeccable multi-octave range still soars in stellar fashion, giving life to "Light up the Darkness" and semi-sinister "Dancing with a Ghost" – and yet the musical ideas from Ivanhoe explore lighter shades that never really go far in terms of exploration and excitement. The keyboard/ guitar synchronization for "No Sorrow" elevated the heart rate a touch, while the eight minute title cut just struggles to move at any logical construct, seemingly stuck in a breakdown lane for a tempo. When the bonus track (a live version of "Whipping the Flies" off 1997’s "Polarized") keeps my interest infinitely more than the studio album, you know that something has to be amiss.

Progressive metal musicians earn the right to fire on new cylinders all the time. The previous album "Systematrix" hit the mark – "7 Days" took a detour and as such struggles to gain long term airplay for me.