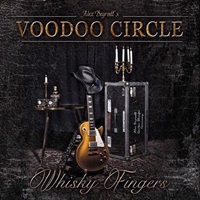 The fourth studio album from bluesy hard rock band Voodoo Circle, "Whisky Fingers" is all about pumping out those electric grooves, organ and guitar hooks, plus the powerhouse vocal delivery that made acts like Led Zeppelin, Deep Purple, Rainbow, and Whitesnake household names. Seasoned musicians make this album even better – because when you’ve been playing heavy metal and hard rock for the better part of decades, you know what it takes to get the songs across accurately and convincingly.

Vocalist David Readman (Pink Cream 69) has that throwback emotional range that can out Coverdale anyone, while still bringing a touch of Robert Plant to the proceedings. On a couple of songs like "Straight Shooter" and first single /video "Trapped in Paradise" – he gets supplementary support from keyboardist Alessandro Del Vecchio, almost in a similar fashion as you get from the Coverdale/Hughes period of Deep Purple. Guitarist Alex Beyrodt throws down all the guitar tricks you can imagine – solid and structured, speedy during certain instrumental sections, but always putting the focus on the individual needs of the track at hand. He’s savvy and spacious during the restrained ballad "The Rhythm of My Heart" – while very Randy Rhoads meets John Sykes oriented in his double barrel riff action for highlight "Medicine Man".

Sure there are similarities abound to a lot of your favorite songs – but check out "5 O’Clock" and the "Woman from Tokyo" guitar/organ syncopation that hits you immediately transports the listener to the 1970’s in a happy manner. There’s not a filler among the 11 songs – a great mixture of up tempo melodic hard rockers, bluesy old school-oriented heavy anthems and a series of ballads that can bring tears to some and bring others closer together.

Consistency appears to be a hallmark of the entire Voodoo Circle discography. "Whisky Fingers" is the real deal for all classic hard rock fans – exciting, entertaining, and highly memorable.