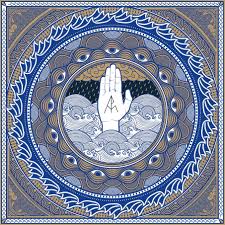 Déluge is yet another interesting French outfit that, musically speaking, falls somewhere inbetween modern black metal and inhumanly furious post-hardcore. It is hard to believe that "Æther" is the band’s debut album, because it not only sounds very tight and well-executed, but also quite clever and well-thought-out in terms of the actual song arrangements and structures and so on. The music is diverse in the sense that those extremely bombastic and intense parts suddenly break down only to make room for some strangely dark and mellow riffs. The album as a whole has a very claustrophobic and uneasy feel to it. Everything is just…well, grey and morose, I suppose. The samples of rain and wind that creep in from time to time only emphasize and underline that melancholic aura.

The opening track, "Avalanche", is so massive and hard-hitting that it makes me want to peel my face off whenever that wretched thing explodes right out of the speaker. Another highlight is "Hypoxie" in which the piano makes an appearance, and that particular melody is so heartfelt and otherworldly, but then the fucking thing just takes off and tears you a new asshole. These guys mean business alright. Nothing ever stays the same for too long within the musical sphere that is "Æther". One complaint though is the vocals as they could have been more varied and thus more in tune with the different nuances of the music, but they get the job done for the most part.

While perhaps not as experimental or as far out there as some of their label mates, the members of Déluge have crafted a very solid, interesting, and atmospheric album that one does not get bored with easily. Some of the best contemporary black metal bands and projects are French (as if you did not already know that, you slimy maggot!), and I dare say that Déluge is one of the better ones that I have had the misfortune of listening to lately. Recommended for sure.