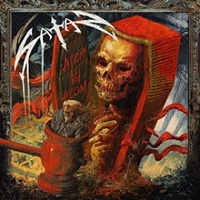 Once revered then ridiculed, the times are indeed flipping again for UK traditional metal act Satan. 30 years beyond their 1983 classic studio platter Court in the Act, that lineup reunited and released one of the best albums in the genre in quite a while with Life Sentence. Requests for festival appearances and a number of tours across Europe, South America and even our North American shores prove successful enough to warrant another studio endeavor.

What most ardent followers of heavy metal love about the quintet at this point is their steadfast belief to hold onto the principles that put them on the map in the first part – lively riffing that roars and attacks, equally engaging tempos and the unmistakable commanding range of Brian Ross. From the opening piercing scream that sends "Farewell Evolution" into the space stratosphere to classic twin guitar spider web lines for "Ruination" that are part progressive, part early Iron Maiden – and 100% metal to the bone – Satan channels the right aural nerve endings to elevate adrenaline and promote a lot of air instrument simulations.

You won’t hear a more natural snare snap and bass kick than you get from "The Devil’s Infantry", Sean Taylor pounding out the tempo at a pace that men half his age wish they could convincingly attain, especially when the middle instrumental break takes on more of an elevated shuffle sequence. Versatility is a hallmark, anthems like the title track and "Ahriman" containing the right chord to melody to hook combinations to elevate horns, the latter even reaching a little into The Ramones meets UK punk archives at times.

Ultimately Atom By Atom‘s long term appeal is held within the deft axe skills and brilliant catch and release work from Graeme English and Steve Ramsey. They know when to team up, thicken up the rhythms, do back and forth tradeoffs, and execute material like the high harmony filled "Bound in Enmity" and closing seven minute epic "The Fall of Persephone" as if they were eighteen again, or in the Denner/Shermann meets Murray/Smith hall of fame.

Brilliant and proof that the NWOBHM will never die.