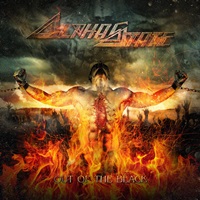 ALPHA STATE – Out of the Black

Greece has a reputation for solid traditional/power metal being a staple of their scene, and here’s proof again of that with the Athens act Alpha State. Forming in the spring of 2014, "Out of the Black" is their debut album, a 10 track record that showcases a very primal attack that is certainly heavy yet respectful of melodic hooks on both the vocal and musical fronts. You can expect anthem oriented numbers that are very down to earth, keeping things moving along at a moderate 4-5 minute clip as the riffing makes you want to headbang while the choruses contain the requisite qualities for audience involvement.

Vocalist Manos Xanthakis has a mid-range type voice that has a lot of Teutonic qualities – as if channeling singers like Andy B. Franck (Brainstorm) and maybe the lower reaches of Bruce Dickinson during cuts like "Last Day" and the quiet to heavier "Worlds Control". The guitar work has a lot of similarity to Primal Fear with occasional nods to Black Label Society in terms of bluesy textures – Pete Breaker keeping his tone simple and effective on "Don’t Look Back" while a little more aggressive on the double bass fueled "Road to Hell". Alpha State are adept at dynamically interspersing guitar hooks or solid riff combination to ensure a proper flow from first song to last – as "The System" and the title track are two of my favorites that appear on opposite sides of the track listing.

It may take another record or some seasoning in the live circuit to get Alpha State to shed some of their obvious influences, but for now "Out of the Black" contains a lot of respect and passion for the heavy metal genre.

BEYOND THE GATES IV – Bergen – Garage