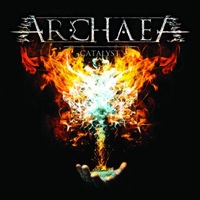 A Gothenburg, Swedish sextet, Archaea since 2007 have been pushing out their brand of melodic death/thrash to the masses. "Catalyst" is their full-length debut, after releasing a demo and EP earlier in their career. Taking to the time to build their own studio allows the group to record on their own pace and time, and their sound has a lot of that modern bounce/ semi djent groove while also taking a tip of the influence cap on their Gothenburg history.

Hannes Heidarsson has a keyboard approach that is not so much intricate as it is mood-altering, giving guitarists Markus Heidarsson and Magnus Lindegard space to layer their twin axe attack in an adrenaline-oriented, jackhammer style. "Vacuum" and "Salt" giving the listener two illustration of this back and forth volley match that occurs throughout between the three musicians. Nils Bossius as a singer prefers to keep things rhythmic and roaring, growling and screaming often in unison to the riff choices or drum tempos – which can work for some but can also be a little tedious for others. No song touches the 5 minute mark, meaning that if there’s something that doesn’t tickle your fancy (for me it’s the slower, possibly more commercial hook throughout "Helios Ascend"), there’s always a fresh track right around the corner.

Archaea to me take thrash/death roots from their hometown and add in a little bit of the current, modern heaviness while using keyboards in a dynamic light. In other words, "Catalyst" is not your average melo-death/thrash record to come out in the last 15 years – so potential is present for the six-piece to impress.