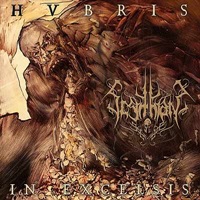 The Scythians were a warlike Iron Age tribe from the Black Sea who enjoyed many successful military conquests. This particular duo from the UK possess a similar black/death march template, as "Hubris in Excelsis" is the second studio full-length from Scythian, six years removed from their debut "To Those Who Stand Against Us…". These 9 songs remind me a lot of the early thrash, early death, and early black metal movements – when all three never had any inkling of commercial aspirations.

This is a record for those who love raw screams, blitzkrieg riffing, faster than the speed of light tempos, and the days of Bathory, Cyclone, and Sodom. Sure a lot of the lead breaks in the title track can revolve around whammy bar dive bombs or speed trilling that would make Kerry King proud – but that’s part of the charm. The band willingly follow up certain songs with more of an epic black strain, as "Apocalyptic Visions" contains a lot of cultural strains in the guitar melodies that promote a lot of audience unity in the front half before the death/black speed attack returns. Evilness and atmosphere carry equal weight to the particular riff sequences often employed – check out "Three Stigmata" for another layered feast for aural metal ecstasy. The 8 minute closer "Dystopia" features some folk/acoustic parts amidst the electric madness, a fitting epic to end the proceedings.

S. Vrath and A. Von M since 2004 have steered Scythian in their own direction – and "Hubris in Excelsis" serves up a 46 reminder of the potency of death/black metal with early thrash throwback tendencies.