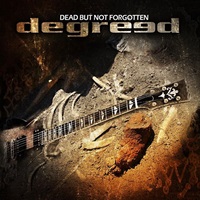 DEGREED – Dead But Not Forgotten

Can a band exist today that has a little bit of that modern edge while still embodying the classic melodic hard rock/ AOR template that ruled the airwaves in the 1980’s? Sweden’s Degreed possess both elements seamlessly on their third studio record "Dead But Not Forgotten". Where the current electro-pop keyboard portions from Micke Jansson may appear in spots for "Madness", the layered vocal harmonies from bassist Robin Ericsson and guitarist Daniel Johansson will make most think of everything from Bad English and The Little River Band to possibly fellow AOR darlings Houston.

The quartet shine on mid-tempo anthems that grab your ears due to a steady, pulsating drum tempo or the right guitar/keyboard hook – check out "Better Safe Than Sorry" or "Forgive You", the former also containing the big vocal chorus tailor made for highway travel. Certain "woah" background vocals even bring to mind -shudder to say – pop sensations One Direction for "Touch of Paradise", but fortunately the musical accompaniment is much heavier to support the happier melodies. Neal Schon and Steve Lukather would be very proud of all the licks and tricks that Mr. Johansson uses on these 14 cuts, energetic with a little bit of Euro-metal meets Amaranthe charm on "Forgive You" while classy on the opener "The Scam".

The star of the show will probably be Robin’s stellar vocal abilities – he channels many emotional situations at the drop of a hat much like the super acrobats of Jorn Lande, Jimi Jamison, or even contemporaries from The Poodles and H.E.A.T. Throughout the record you’ll be humming the verses or choruses to "Drama" and "Firefly", his consistency raises the game for Degreed. Considering this is my first exposure to the band, I’d say this is as good as it gets in the modern hard rock meets classic AOR template.