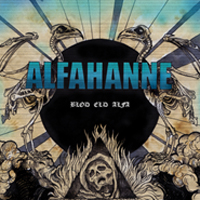 The Swedish horde known as Alfahanne is a strangely fascinating musical entity that I find very hard to sum up or categorize in just a few words, but is that not the beauty of music at times? To put it briefly, Alfahanne has a delightfully twisted way of mixing old-school black metal, classic (hard) rock, punk, and early goth music with each other other to great effect. While some parts have a raw, dirty, and even downright nasty atmosphere to them, others are borderline moving, haunting, and melancholic.

While the previous album entitled "Alfapokalyps", was quite entertaining and cool to listen to, "Blod Eld Alfa" sounds more focused and balanced. The melodies and riffs are stronger, the arrangements are better, and the album as a whole is simply more moody compared to its predecessor, which, obviously, appeals to a sombre sucker like me. The musicianship is excellent while the production strikes a fine balance between the suitably raw and the powerful. While some of the songs sound slightly murky in places, which totally fits them, they are punchy and driving.

The album consists of nine captivating tunes that are all very good andn well-written, but I must say that "Besatt", "Arkeologen" and "Slutdestination Eskilstuna" rule beyond belief and ought to convince even the most sceptical of you sorry fucks out there to invest in this record once it is released.