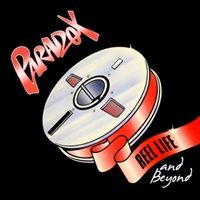 The 1980’s – a glorious time for heavy metal, but also a time when major money could make or break a band based on proper promotion and exposure channels. Many unsigned acts with just as much talent and ability would fall through the cracks… which brings us to this Minnesota band Paradox. They would release an EP in 1985 called "Reel Life", but split up shortly thereafter. Stormspell Records felt the need 30 years later to re-issue this EP along with 9 other songs to complete the story of the band in a nice 70 minute time capsule if you will.

The four piece have a sound that straddles the line of melodic hard rock and traditional metal – the vocals contain a lot of background harmonies during the choruses while the chord progressions are lean and mean. Chuck Kaiser and John Eller offer up a potent rhythm guitar foundation with proper speedy lead highlights – incorporating a number of influences from Aldo Nova and Neal Schon to Randy Rhoads for "Surrealist" or the bluesy, Fastway oriented "Wicked Rock & Roll". Just as much NWOBHM as April Wine comes into play at times, while John’s vocals can be soaring one moment and teasing the next – check out the 7 minute "Morphine" for both aspects.

Production values waver depending on the era of the band we are looking at, and it definitely seems that as the band moved forward in the 1980’s they were going for a more commercially palatable sound on "Run Me Ragged" (possibly veering into Meatloaf territory). Chronicling their career, "Reel Life & Beyond" is ideal for those who love to own a piece of American metal history from the 1980’s beyond the thriving East and West Coast scenes.