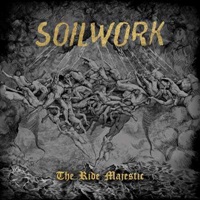 Once you ascend to the top of the mountain in heavy metal, the hard work begins to maintain that level of respect and popularity. So many factors see bands crumble, from the inside in terms of goals and work ethic, and from the outside in terms of proper management and label support. Fortunately for Soilwork, the band keeps plugging along even through the adversity and obstacles that take place. "The Ride Majestic" is their latest studio album, the first with new bassist Markus Wibom and coming off the heels of their double album "The Living Infinite" record many are waiting with high anticipation for where the sextet will go from here.

To recreate their breakthrough "Natural Born Chaos" is not in the Soilwork game plan – as well it shouldn’t be. Incorporating an even deeper emphasis on the hooks and harmonies from a guitar and vocal perspective, the band isn’t afraid to place blast beats and blackened riffs into spots for song of the year "The Phantom", almost bluesy hard rock oriented parts during "Death in General", or the standard wall of surging sound that makes "All Along Echoing Paths" the perfect melo-death meets Meshuggah/Fear Factory concoction. The band also remember the trademark heaviness against melodic hooks that made them headliners – check out "Alight in the Aftermath" and closer "Father and Son Watching the World Go Down" for two solid examples of their solid pacing, groove elements, and Björn ‘Speed’ Strid’s exemplary screams and clean transitions.

Guitarists David Andersson and Sylvain Coudret now are quite comfortable in their axe roles – unfurling a lot of their personal experience and influences into the mix to make Soilwork more dynamic, continually pushing the boundaries of their aggression and extreme aspects while remaining melodic and catchy wherever possible. Drummer Dirk Verbeuren delivers whirlwind speed performances throughout, but never forsakes the mandatory power groove passages or slower swing elements that make "Enemies in Fidelity" and the magical "Petrichor by Sulphur" masterpieces for simulation air instrumentation.

Channeling a lot of the tragedy in their personal lives and frustration over previous management snafus into this 11 song record, "The Ride Majestic" proves that as the band close in on their 20th anniversary, the best times lay ahead and not in the retrospective lane. Another pinnacle effort in a strong discography, Soilwork keep their fellow musicians on their creative toes and we the listeners benefit.