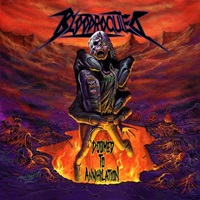 Belgian thrash quartet Bloodrocuted and their current record label Punishment 18 Records feel the time is ripe to reach back into their catalog and release their debut album "Doomed to Annihilation" from 2013. Originally appearing on the market through the band’s own means, this is a quick hitting affair that contains 8 tracks and is over as fast as you can say "Reign in Blood".

American bands certainly factor heavily into this formula of Bloodrocuted – vocal patterns that often mirror old school Nuclear Assault albeit a touch whiny while the music contains a number of start / stop mechanisms, faster than the speed of light lead breaks and those mid-tempo transitions that are sure to gain favor in the pit. Slayer circa "Seasons in the Abyss" comes up against a Death Angel meets Anthrax riff parade for "Venom of Hate", while there are some strong melodic hooks that carry "Screams at Night" as one of the favorites.

Pluses include the dual razor sharp axe skills of Bob Briessinck and Jason Bond and the direct, in your face production/tone that you’ll receive from the group – it has a launching aspect that works from the studio to the stage. No song ventures beyond 4:16, so the band waste no time driving parts into the ground- but the vocals really miss the mark, as it’s very monotone, whiny, and devoid of much variety beyond adding another rhythmic element to the proceedings.

At this point in time, "Doomed to Annihilation" probably has the most appeal to those who love this year’s "Disaster Strikes Back", otherwise most will find Bloodrocuted passé, cliché, and middle of the road.

HELL:ON – Once Upon a Chaos