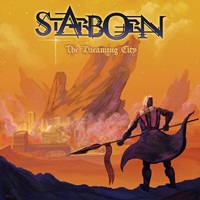 Power metal has gone through many phases, but the roots of the genre embody a lot of Black Sabbath, Dio, Rainbow, and Judas Priest influences – as well as Iron Maiden. UK act Starborn live for that early power, along with fusing a bit of the excitement from many European spawn, on this 5 song EP "The Dreaming City". Bruce Turnbell vocally has a lot of upper register sustainability, recalling everyone from James Rivera to Midnight/ Crimson Glory during certain trailing verses and choruses of "Cruelty Unchained".

Musically a lot of the riffing has this charging atmosphere, the lead breaks highlighting intricacy in terms of shredding and proper technique. Falconer, Liege Lord, Iron Maiden, and Fates Warning in their Arch-led era are four influences when taking in material like the double bass pumping "Carnival of Shadows" or the 13 minute epic title track closer. The production values are a touch thinner than preferred, as the bass seems a little distant in comparison to the guitars, but that could be due to limitations in terms of a production budget.

Ultimately, it’s all about the riffs, harmonies, and songwriting when it comes to quality power metal – and Starborn certainly know their craft and can get the blood flowing through this material. Those who love the 1980’s foundation of this movement where finesse mattered as much as the magical, mystical, and literature lyrical content will find "The Dreaming City" impressive. Let’s hope a full-length is in the offing sooner rather than later.