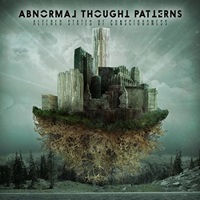 Welcome to the art of progressive, technical, shred metal done through instrumental means by the quartet Abnormal Thought Patterns. A California act featuring the Tipton brothers (Troy-bass, Jasun – guitar and keyboards) plus drummer Mike Guy and guitarist Jason Montero – as three of the four also spent years honing their craft in the well-respected progressive metal outfit Zero Hour. "Altered States of Consciousness" is the second album, differing a little bit from its predecessor in the sense that guest vocalists/musicians like Between the Buried and Me’s Tommy Rogers, Artension bassist John Onder, bassist Michael Manring, and guitarists Jeff Loomis plus Tim Roth to get a total mathematical maze/ shred experience.

Animals as Leaders, Dream Theater, latter day Death, and jazz fusion appears to be the template for ATP to look to as far as inspiration. "Distortion of Perception" starts in arpeggio sweep mannerisms, the drum tempo a little more doom and labored while the tranquil mid-section features bright, clean guitar sprinklings against this free-flowing bass solo out of Troy. "Synesthesia" is another incredibly 6:03 progressive number, driven by the bass and guitar cat/mouse game, sometimes seeing double action from both departments in this sonic battle of the senses. "Nocturnal Haven" receives two treatments – one vocal with Tommy Rogers, and one 27 seconds longer on the instrumental side. It’s a ripping number – filled with exotic phrasing, shred galore, and possibly riding the djent lines.

This is not easy listening music – and obviously not for those who desire simpler arrangements and instant hooks/grooves. But I believe that Abnormal Thought Patterns is mindful that there is appeal to their creativity beyond the schooled musician – so do not think that everything is sheer, over the top technicality, as there are plenty of quieter, reflective sections within this material. Overall, "Altered States of Consciousness" delivers 7 tracks and 42 minutes of spatial insight into the world of progressive, technical shred metal – and another fine entry into the field.