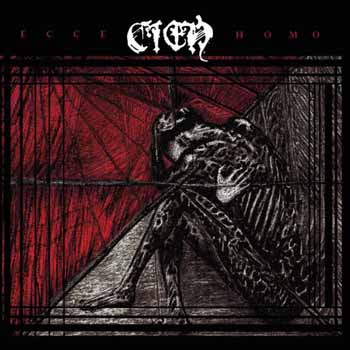 Cień is a Polish black metal horde that has been around for a few years now and released a handful of different outputs so far. Musically speaking, "Ecce Homo" is an interesting and catchy slab of melodic and yet aggressive black metal with a slightly raw edge to it. One of the things I like about this album is that it is quite diverse and varied while working within its own traditional black metal boundaries, so to say. There are lots of violent and spiteful outbursts, but lots of mellow and calm parts to be found as well. You get fast parts, slow parts, and everything inbetween. The vocals are also quite good and menacing while I must admit that I also love the fact that the bass is quite upfront in a lot of places. The band as a whole is actually pretty damn tight while the sound is both punchy and rough around the edges, which I like. The moods and atmospheres cover the melancholic, the hateful, the epic, and the dramatic. For some reason these guys bring to mind Blut Aus Nord in places, but they are definitely not that experimental or otherworldly. Far from it, but in no way is that meant in any derogative sense, because it does have its fair share of twists and turns to it. "Ecce Homo" is a solid and interesting album to lose oneself in. Give this fucker a go.