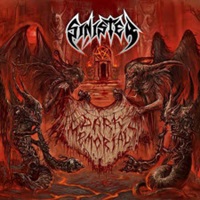 Celebrating their 25th anniversary as a band, Dutch death metal veterans Sinister decided to look back into their record collections and dust off their interpretations of some classic songs that they played in their early days. As a bonus, they re-recorded two demo songs "Spiritual Immolation" and "Compulsory Resignation" off their 1990 "Perpetual Damnation" demo and appeared on their debut album "Cross the Styx" as well. Tackling songs from Sepultura, Merauder, Death, Repulsion, and Carcass among others, the band keep the vocals growly and deathly, which can work in the case of "Beneath the Remains" or "Ridden with Disease", but loses the effectiveness in a more hardcore/crossover offering like "Master Killer".

While most bands would probably do a double live record or possibly a greatest hits offering to commemorate this achievement, "Dark Memorials" instead gives the listener a peak into the influence bank and great bands that the current members of Sinister love. I’m glad they tackled a couple of early thrash numbers such as Kreator’s "Under the Guillotine" and Slayer’s "Necrophiliac", as anyone who studies the development of underground thrash and death can see where certain speed and raw elements are consistent in both to be effective. Bassist Mathijs Brussaard has a thick, pronounced steadiness to his low end that allows guitarists Dennis Hartog and Bas Brussaard ample room for their riffing and lead breaks to shine.

The limited edition disc also has a bonus DVD of a live performance from Australia, while former guitarist Ron van de Polder makes an appearance on the 1990 re-recorded tracks. Sinister has been one of the consistent death acts rarely veering from their established style – so this is assuredly another document to treasure. "Dark Memorials" is an honest testament to the power of thrash and death.