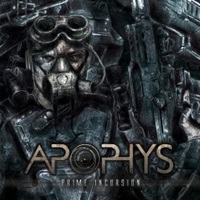 Active for 3 years, Dutch technical death metal act Apophys finally release their debut album "Prime Incursion". The band features current God Dethroned drummer Michiel van der Plicht, and as a five-piece do not waste any time getting to the nuts and bolts of their style. Expect a sledgehammer riff and tempo attack, while the vocals alternate between deep growls and rhythmic nuances that really carry even more intensity to the overall songs.

Fast picking, wicked blast beats, and appropriate ‘slower’ transitions (shifting down to maybe high speed action over death madness) make "Dimensional Odyssey" and "The Sentient" immediate favorites, sure to cause crowd swirling and aggressive energetic explosiveness. While the band is obviously very technical in terms of their chord progressions and riff assembly, the aspect that I enjoy regarding Apophys is they always make sure to have some sort of musical hook and versatility in their tempos. Mid-tempo efforts like "The Final Step" or the almost mechanized "Requiem for the Absurd" keep Apophys in line with a lot of the European acts who intertwine some aspects of Death with the speed/ intensity of say Vader or Behemoth.

Vocalist Kevin Quilligan occasionally has to bark out the lyrics at break neck pace to fall in line with guitarists Sanne van Dijk and Koen Romeijn’s stack of chord inversions and harmonies – check out "The Antidote" during the verses as you’ll be shocked that he’s not exhausted from the tongue twisting delivery. Quieter segments occur from time to time, including the sparse guitar note that ends the longest song on the record, the 5:44 "Ego".

In the end, "Prime Incursion" is a 39 minute album that has appeal to not only the musically inclined, but also the diehard death metal followers.