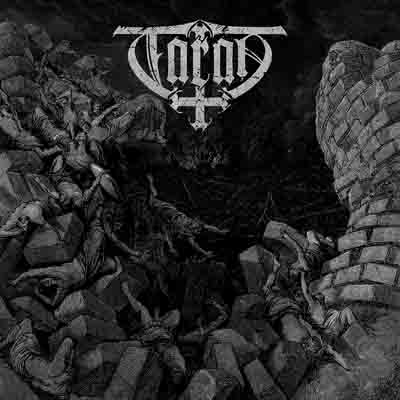 Taran is a Polish black metal ensemble comprised of members who are or have been members of bands such as Arkona, Witchmaster, and Throneum among others. Even though the band has existed for 13 years and released a couple of split outputs and a demo, «Taran» is the band’s first full-length assault. Musically speaking, Taran performs crushing and highly aggressive black metal consisting of violent riffs, hateful vocals, blasphemous lyrics, and an overall foul and anti-Christian mood. Not unlike a lot of other orthodox black metal bands out there in a certain sense. The band members obviously know how to handle their instruments and write varied songs, although I think some of the riffs here and there are a bit lacklustre, thus a couple of the songs do not come across as being that memorable really. However, «Taran» is a pretty well-balanced record in that we are dealing with a very pure expression of black metal, which is to say sinister and dark black metal devoid of string arrangements, synthesizers, harps, violins, and so on and so forth. What you get are guitars, bass, drums, vocals, and a destructive sound spawned in the deepest pit of Hell. Equally important is the fact that these guys have managed to vary their songs a bit by means of different tempos and changes and so on, which means that you sorry fucks out there are not only being served hyper-speed black metal, but also slow and bone-crushing parts that will tear you a new asshole. Like I said earlier on, some of the riffs and melodies are not that strong or memorable and a couple of songs do not move me that much, but that is a somewhat minor complaint in that the majority of tunes are quite interesting to listen to. In an overall perspective, we are dealing with a pretty solid album. On a final note, the calm and yet sinister ambient-like introduction to the album is great and the artwork rules. If pure and relentless black metal gets your dick hard then check «Taran» out.