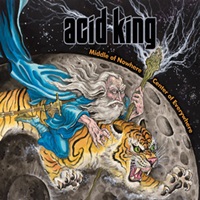 You know a band has been around for a while when I remember reviewing their debut album "Zoroaster" in 1995 when we had in print fanzines and magazines as the norm. Hailing from San Francisco, California, the trio Acid King return with their fourth full-length "Middle of Nowhere, Center of Everywhere". This is essential 5 full tracks sandwiched around a 4 minute intro and 2:43 outro – but you will get arrangements on the sprawling side, averaging about 8 minutes a piece.

This is stoner / doom metal in essence, where the bass plays as important a role as the guitar in setting a mood or driving the hook of a song. Bassist Mark Lamb fills the landscape in low end ecstasy, driving material like "Laser Headlights" and the morose "Infinite Skies" as if lurking in the swamp and fighting for one’s life. Drummer Joey Osbourne punctuates the fills from a 70’s perspective, while his main groove duties maintain that slow swing necessary to keep everything solid and dynamic in a genre not well equipped for variation. Guitarist/ vocalist Lori S. handles the double duty role professionally, her melodies haunting and mesmerizing as her axe rings out chords of gloom.

A lot of times the little things in stoner/doom metal mean the most – be it a prolonged instrumental section that feeds off of a repetitive foundation only to build through a key lead break, drum fill, or bass maneuver – all three of which occur during the 9:39 "Silent Pictures". Even the wizard riding the tiger on the cover lets you know Acid King are not of the ordinary ilk – and I believe the fans wouldn’t want it any other way.

Hopefully the fifth album will not take a decade to come out, as "Middle of Nowhere, Center of Everywhere" is another stellar offering from the three-piece.