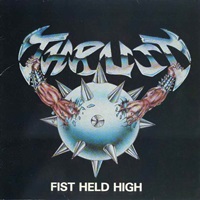 Anyone remember the early Metal Massacre series of records that gave the world their first exposure to up and comers developing in the underground? Outside of the expected California and New York bands given a chance to expose their wares, we would often get a lot of Illinois bands, like the following traditional metal act Thrust who appeared on Volume 4 with "Destructer". As a result, Metal Blade would sign the band for the release of the "Fist Held High" record, before cross country moves, lineup shifts, and a stylistic change would be the demise of the group.

So what we have here is a special 2 CD package that consists of that original 8 song album, 4 live tracks and the "Destructer" track from Metal Massacre 4 on the first record – plus an 18 song follow up that intermingles the planned second album (10 tracks) with other demos that never were officially released during the band’s first incarnation. Thrust early on in their career was a US traditional metal act – very focused on assaulting the senses with their brand of Priest meets Accept oriented riffing and tempos. An 8 minute song like "Freedom Fighters" wins me over because of the doom drum march and John Bonata’s one of a kind vocal command and screeching abilities. "Thrasher" and "Posers Will Die" typify that early 80’s, take no prisoners attitude in both the music and lyrics – Thrust determined to prove that America could also develop potent traditional metal.

"Reincarnation" at heart straddles the lines between what the band were trying to do on "Fist Held High" but also falling in line with a lot of the Sunset Strip hard rock scene that was blossoming at the time. Simpler rhythms, obvious attention to hooks, and melodies more in line with say Ratt or Jackyl than anything Halford or Dickinson related. The ‘hush-hush’ refrains in "Scream Girl Scream" or obvious swanky bluesy riffs for "Get Crazy" just speak volumes of a band wanting to fit in instead of sticking to their guns. Hearing some of the latter demos such as "Psycho Killer" is a treat, as long as you understand the primitive production quality of the material at hand.

Historical documents are nice because they fill in the gaps of artists who maybe had their peak at a time when major label bands ruled the landscape. I much prefer this as a one disc offering over the two CD package.