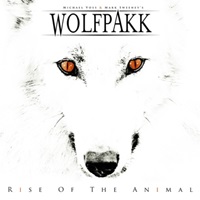 WOLFPAKK – Rise of the Animal

The brainchild of Mad Max vocalist Michael Voss and ex-Crystal Ball vocalist Mark Sweeney, Wolfpakk is a project record stylistically going for the heart of 80’s hard rock and melodic metal. 28 guests on vocals, bass, guitars, keyboards, and drums tackle these 11 Sweeney/Ross compositions – it would be difficult to list them all, but suffice to say they are prominent names in the hard rock/ metal history.

"Rise of the Animal" seems good in theory, but high quality performers can only elevate average songwriting so far. Bagpipes offer an appropriate dynamic angle to the Celtic-themed "Highlands", Joe Lynn Turner handling the chorus with professional grace while guitarist Bernie Tormé mirrors a lot of the bagpipe action during the instrumental interchange. "Sock it to Me", outside of it’s obvious sexual themes, contains one of the worst lines in hard rock history for Marc Storace to sing – ‘I say let’s go – you diabolic fruit’. For the most part, a lot of this material fans down classic German 80’s hard rock lines – something similar to what you would have heard from Sinner back in those days. Don Dokken actually is given a decent spotlight on the driving "Running out of Time" – it may not be reaching his "In My Dreams" peak years, but his smooth mid-range is infectious during the chorus.

The longest track is the 8:42 title cut – a slow, marching build up gives way to a steam rolling double bass oriented power arrangement, Michael Kiske soaring to the heavens during his parts while guitarists Axel Rudi Pell and Martin Rauber get solo spots with keyboardist Chris Ivo sandwiched in between. And the stark white wolf cover doesn’t really give the listener much of a clue as to what they may expect musically – but after 58 minutes, "Rise of the Animal" isn’t a record that I’ll find myself returning to very often.

A diamond is still rough if there’s not enough care and nurturing that takes place – and for Wolfpakk, the songwriting ideas do not elevate the talent on display to make the final product very memorable.