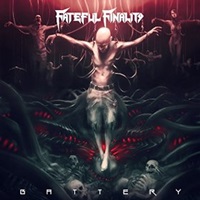 Winners of the German Wacken Metal Battle in 2012, Fateful Finality signed a record deal with SPV for their second album "Battery". These 11 songs mix thrash and modern metal – vocally very much in line with Phil Anselmo of Pantera, while the music contains ripping riffs and plenty of punch in terms of the tempos as if Metallica were running headlong into The Haunted and Lamb of God. A lot of the off-time drumming gives the twin guitar harmonies in "Facades" standout spotlight qualities, while I also enjoyed the heads down Hammett-like soloing against solid mid-tempo riffs for "Rite".

The clean vocals during "Unchained" helped differentiate things from the normal vicious, raspy scream attack – and hopefully is something Fateful Finality explore more down the line. Not too thrilled on the cover art that has a typical Testament meets Slayer feel – but that’s a minor quibble. "Battery" will get the punters going, and probably appeal more to the teen-twentysomething generation than the old guard. The second half appears loaded with stronger material, as "Possession" and "Never There" are fairly standard slammers that beginner bands can throw together in their first couple of rehearsals.

In the grand scheme of the modern thrash movement, Fateful Finality are solid but a tad bit predictable in their style. I’d love to see them take a few more risks to stretch the songwriting boundaries, as the quartet does have the chops and ability to break out. Let the walls of death, pit mongering, and head banging commence.

MORBID EVILS – In Hate with the Burning World