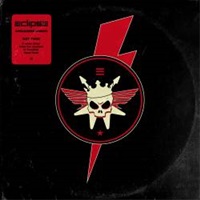 Sweden is certainly one of the top countries running out a long line of impressive melodic hard rock bands these days, and Eclipse needs to be the main group near the apex of the conversation. "Armageddonize" is their third full-length, coming on the heels of 2012’s "Bleed & Scream" which won accolades across the globe for its potent songwriting, attention to engaging melodies, and general vibrancy that won over critics and fans alike.

Imagine if you will an AOR-vocal harmony driven 80’s era Whitesnake that can take advantage of today’s production techniques and this will give you an indication of where Eclipse comes from on all fronts. Magnus Henriksson channels a lot of Gary Moore, Michael Schenker, and John Sykes bluesy lead play and chord choices during "Blood Enemies" – from the opening slow building lead run to the marching main licks, it’s a standout Eclipse song that should not be rescued from any live performance anytime soon. Keyboards come in for rhythmic hook support, pulsating for the commercial hook within "Wide Open" (very Journey-esque here). The icing on an already attractive musical dessert is vocalist Erik Martensson, he has one of those exhilarating, hang on the edge of your seat deliveries that could sing the phone book on radios coast to coast and still win me over. Check out the Blue Murder-ish, half acoustic/ half electric "Breakdown" as well as up-tempo opener "I Don’t Wanna Say I’m Sorry" for a range that captures the best of David Coverdale, Sebastian Bach, and David Readman.

Focus and balance are the keys to a long lasting melodic hard rock product- and "Armageddonize" has both squarely on the tasks at hand. 43 minutes later, the brain wants to return to track one and play this all over again. If anyone ever believes that newer bands can’t rival some of the best records of the multi-platinum 80’s marketplace, they really need to check out Eclipse and assess based on quality, not era. Possibly the hard rock album of 2015 – legendary stuff here folks.