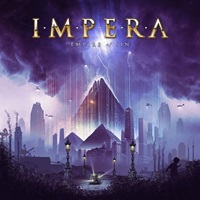 A classic four-piece in the traditional sense of the word is present for the third studio album from Impera "Empire of Sin". Assembling a killer lineup in vocalist Matti Alfonzetti, guitarist Tommy Denander, bassist Mats Vassfjord, and drummer J.K. Impera, the 11 songs on this record combine the classic bluesy hard rock of the 80’s scene and a melodic smoothness vocally that has a lot of AOR charm. Overall songs such as the slower but addictive snake charmer "Hole in the Sky", heads down / heart pumping "Lost Boy" and the peppy closer "Never Enough" bring to mind everything from Sammy Hagar led-Van Halen to the early Lynch Mob and even best Journey days.

Matti’s voice is in that Robert Mason/ David Coverdale mold with a touch of AOR ability, as he knows when to hit those money notes in a high register but also be smooth in the choruses – check out "Evil (Become a Believer)" and the easy-going ballad "Darling" for his professional care and demeanor through the verses and register changes. Tommy Denander is the consummate axe player for Impera – keeping the song as a primary focus, his lead break ability is in line with the best in the business on the up tempo "Lost Boy" as well as the heavier/ semi-exotic "Don’t Stop". Add in the flexible rhythm section duties of Vassfjord and Impera that can be groovy and steady depending on the needs of the track at hand and you have the recipe for a winning, high caliber record.

"Empire of Sin" will be another must purchase for those who love European style melodic hard rock, definitely on the bluesy side and chock full of hooks on both the vocal and musical departments.