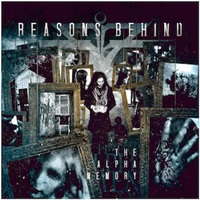 Always a contender in the power metal game, Italian musicians have also presented flourishes of bombast and symphonic touches – so it’s natural to see bands like Reasons Behind combine the two sub-genres on their debut album "The Alpha Memory". Pluses include a natural drum punch from Riccardo Grechi that benefits driving material like "Under the Surface" and "The Ghost Under My Skin" and the fact that guitarist Gabriele Sapori gains as much of a sonic spotlight as keyboardist Dario Trentini, which often is not the case in this genre.

Vocalist Elisa Bonafe has a semi-operatic nature to her melodies, a flair for the dramatic that is angelic in spots but also a touch weary for the ears as I believe she reaches too high in spots for her natural delivery ("With Your Light" has some pitchy spots). Reasons Behind have a lot of those dark, energetic qualities that put Kamelot on the worldwide map through the years – but I think the band doesn’t quite have the same songwriting polish as their mentors, often piecing together segments of material without any proper cohesion. Heavy parts sitting next to quieter changes that sometimes go on for far too long, as if the buildup doesn’t transition into a proper catchier riff or interesting lead break- and in this genre, that can be a deal breaker for many to move on.

You’ll get 7 proper songs and 3 intros/ interludes that set up other parts of the album. "The Alpha Memory" does have harmonic/ melodic sensibilities at heart, and I think could gain some appeal in the scene – I just think the band really needs to do more homework in their arrangement/ idea construction and smooth things out for the follow up. Hopefully the constructive criticism can be channeled in the right areas, as Reasons Behind possesses heavier and diverse qualities that could win many over.