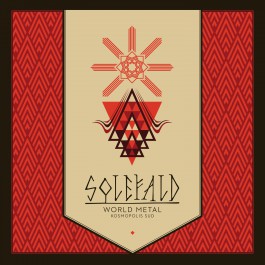 Songs like "Bububu Bad Beuys" does maybe not make the record more serious, but one thing is for sure: It’s damn catchy and alot of fun. Good times! Not only the names of the songs, but also the obscure sounds and instruments used makes this album into a rolercoaster of fun.

Along with fun and good times, comes the dark vocals and the musical picture that help build this into a monument of metal. Because even if it is alot of different feels to the album, it does not forget that it is a metal record, and this is a good sign.

World Metal has a very artistic way of potraying itself, and it makes it seem quite intelectual. It’s like tasting a really good wine. And the more you listen to it, the more you understand it’s broad range of cultural playfulness. When an album starts out this good, then it is a very good sign that it *still* has the ability to grow more on you.

Strong melodies and dark vocals aren’t the only thing this album brings to the table. Solefald also serves their audience some awesome electronica-like parts and some really manly drumbeats. This pushes the album to break the limits of the standard metal album of today.

It’s easy to see that World Metal is a sequel to Norrøn Livskunst, both in musical style and artwork. It falls nicely in to the collection.

The album is alot of fun, and it is very clear that the band have been enjoying themselves with the creation. It is so great to see a metal band that points out the silly parts of their genre, and still manages to make it sound really cool.

You will definetly not be bored while listening to this piece of ridiculous, yet so cool record. So to all other bands that plan to release an album this year: Solefald set the standard. Do you dare to follow?