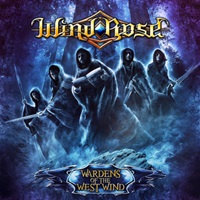 Italian power/progressive metal acts tend to have a huge connection to the neo-classical/ symphonic scene – which probably comes natural to them due to their appreciation for the genres growing up. Wind Rose are another quintet who straddle the line between all these genres on their second album "Wardens of the West Wind" – pushing a heaviness through their guitar play and occasional darker chord combination choices a la Symphony X or Kamelot- but then the keyboard/ classical flourishes bring to mind Rhapsody (Of Fire) and Thy Majestie.

Vocalist Francesco Cavalieri has an interesting delivery – capable of being very gritty in a Russell Allen manner but also conveying some Falconer-like theatrical movements, often in the same song such as the brilliantly cinematic "Heavenly Minds". Some of the lower choir work for "The Breed of Durin" makes you feel like you are taking in a grand dramatic battle spectacular, the guitars from Claudio Falconcini and rhythms of drummer Dan Visconti pulsating in unison to the words at hand. Naturally keyboardist Federico Meranda plays a prominent role in many of the key hooks and dramatic atmosphere that drives a cut like "Spartacus" – using a bevy of tones and layers to serve and volley against this warrior-driven tale.

Keeping the album at a rather controlled 52 minutes gives Wind Rose material plenty of breathing room to sink deeper into the cranium without exhausting the listener due to bombast or extraneous sonic bells and whistles. In comparison to their debut album "Shadows over Lothadruin", I’d say Wind Rose chose more of a power/ choir approach while keeping the progressive portions under tight control for "Wardens of the West Wind". Exciting for those who love sing-a-long power metal, and I can see this going over like gangbusters in a large festival atmosphere.

BLOODLASH – Drowning Amidst the Nebulae