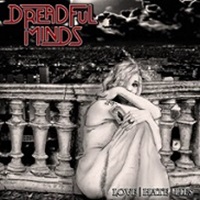 A German sextet performing in a style very familiar to those who love melodic metal release a 14 song album with "Love, Hate, Lies". I’d say their sound has a lot of 80’s characteristics – powerful riffing, strong metal grooves, and keyboards adding airy ambiance to the proceedings. Those who remember the early "Colour Temple" days of Vanden Plas and underrated Glenmore will find the pop-oriented vocal choruses and hooks within "Lost My Heart" and "Changing Memories". At other times the keyboards offer a little progressive contrast for the dual Christian Wolf / Rainer Weckbach axe attack a la Dream Theater – check out "Silent Tears" for the best example in this regard.

Holger Weckbach as a vocalist has a range that is comfortable in lower parts, but sounds a touch monotone during upper reaches – I don’t know if this is under-confidence or inability, but Dreadful Minds will need to work on this in the future if they wish to ascend the ranks. The rhythmically driven "Sixty Feet Under" offers another nuance to their sound, very serene during the verses and explosive at other instrumental moments. Why certain bands insist on releasing albums over an hour outside the realm of pure progressive rock/metal or doom is beyond me – because the average listener really starts losing interest in most bands around the 40-45 minute mark, so it’s tough navigating "Reborn" and "Wake Up", tracks 13 and 14, as a result.

Overall, this is a nice slice of German melodic metal from a veteran band (originally active from 1992-2005), and we shall see if this can re-assert their place in the scene.