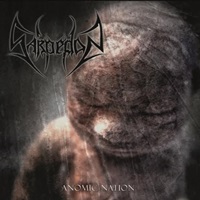 Straight from their official Facebook page, Norway’s Sarpedon is ‘declaring war on progressive metal as we know it’. My first exposure to this act, they’ve been active since 2005 and put out two demos before releasing this debut album "Anomic Nation". We have here an 8 song album that is as heavy as it is progressive – the vocal inflections from keyboardist Eirik P. Krokfjord comes from more of a lower Warrel Dane meets gothic template, making songs such as "The Claustrophober" and dynamically subdued to rhythmically active "The Carnival" different from the norm.

As such, this material has as much in common with Nevermore and Communic as it does Symphony X and possibly Savatage – along with some darker, extreme influences from drummer Carl M. Engstrøm’s double kick speed to high pitch black metal oriented riffing that flesh out sections of the 9 minute epic "My Mysteries Unwind- Part II". The band doesn’t reach for the heaviest chord progressions, and often intertwines a more basic groove/chug combination while a shred/arpeggio oriented lead break springs forth – as is the case on the shorter 3:14 "My Mysteries Unwind- Part I".

Sarpedon is a type of act that won’t gain major kudos because they don’t appear on the surface to be very blazing or flashy in terms of their overall performance – but they have created a sound that’s very much their own, and that’s what makes "Anomic Nation" highly appealing in the long term. Beyond a logo and cover art that appears more underground than mainstream, seek out if you want something left of center in the progressive metal realm.