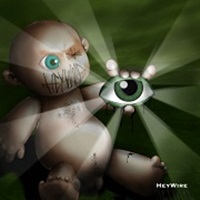 This Danish quartet play a musical cocktail of symphonic rock with metal and hard rock textures on this self-titled album. Nothing overly adventurous, but definitely rooted in the 1970’s/ 80’s scene – aspects of Deep Purple, Royal Hunt, Saga, and Styx come up most when taking in songs such as "Under the Sun" and the down trodden ballad "Love" which opens with a pretty Gary Moore-like solo break.

Bassist Anders Mandrup doubles up on vocals, and it tends to me one of the weaker parts of Heywire’s style – as he’s more suited for a 90’s alternative act than a more melodic outing as his voice isn’t very convincing and very pitchy. Favorable elements include more of a laid back song foundation – the keyboards of Jørgen Hansen possess a Dennis DeYoung meets Jon Lord spirit, often leading the direction and mood of tracks like the marching opener "Never Blink Again" or deeper "My Way Out". I love the bright snare snap from drummer Taz Plummer, while guitarist Jay Jason proves to be a formidable ally in pumping up the semi-progressive symphonic rock platform the band puts forth.

Taking in this record in multiple sessions, I’m left bewildered as to a full-on recommendation. Certain riffs and band interplay on display for "Running" showcase definite talent and ambition, but the overall weak vocal performance could lead many running for the exits. Six different vocalists have come through the turnstiles, and expansion could be the key to find a stronger, multi-octave singer capable of bringing the songwriting to bigger heights.

Probably a record that most will need to check out a song (or two) before figuring out if this is safe to add to your collection.

INQUISITION – Into the Infernal Regions of the Ancient Cult (re-release)