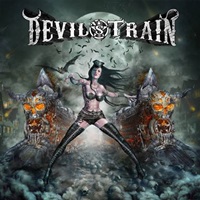 The debut, self-titled album from melodic, bluesy hard rock act Devil’s Train back in 2012 made quite an impression on the scene, smartly putting together familiar players in the scene like Mystic Prophecy’s R.D. Liapikis on vocals and Lakis Ragazas on guitar, ex-Stratovarius drummer Jörg Michael on drums, and current Masterplan bassist Jari Kainulainen. Given a couple of years to create the follow up, it really shouldn’t be a surprise that "II" expands on their foundation, generating a healthy mix of 80’s bluesy metal influences as well as classic 70’s rock templates, and adding the occasional nuance of boogie and stoner parts to give us 11 originals plus 2 covers of high energy, good time Devil’s Train material.

Certain songs explode out of the gate like classic Van Halen in terms of the drum/ guitar boogie interplay that made Alex and Eddie as brothers iconic – "Gimme Love" and "You and Me" two of the best examples. Exploring a little bit of the slide, acoustic swamp guitar work for emotional texture on the opening sequence of "Mr. Jones", the song quickly ramps up electrically into something we haven’t heard since the Badlands days, Lakis laying down a solid thick chord buildup that allows R.D. a chance to hit those fierce highs in solid David Coverdale/ Ray Gillen traditions, while the added Jörg cowbell accents make this an easy album highlight and future concert centerpiece.

Occasional nods to more modern rock/ stoner type bands come up on peppy material like "Can You Feel" or "Suffocated", but I believe in the hands of these European musicians they know how to balance out the groove and hooks so that it’s musically gripping instead of being corporate rock fodder. We also get two covers: Steppenwolf’s "Born to Be Wild" and Led Zeppelin’s "Immigrant Song" – the former given a heavier, more current guitar tone while the latter of course showcasing R.D.’s multi-octave range and subtle verse cues that mirror the greatness of Robert Plant.

It is one thing to take a range of music and write your own material – but quite another to pay homage and come away from an original take without sounding too throwback or retro. Devil’s Train and "II" succeeds purely because they honor and respect their influences and heroes, while creating music for the current generation to treasure. Another 50 minute record sure to gain years of listening enjoyment.