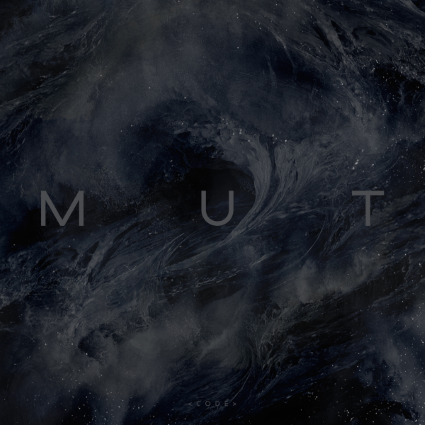 Code has been an interesting band to follow ever since it was first conceived back in the early 2000s, not only due to the quality of its full-length albums, but also the unpredictable and exciting twists and turns that the music and the band as a whole seem to have embraced wholeheartedly ever since the beginning. I have never really felt that any of the albums by Code were totally alike or similar and yet they all bore that undefinable hint or trace of being Code albums. It sounds weird, but that is the way it is.

"Mut", which contains 9 strangely haunting tunes, has a dramatic and emotional edge to it that appeals to me greatly. I am tempted to say that the overall sound and expression of the band lean heavily on progressive post-rock, carnivalesque metal, and avantgarde music. That is a vague description for sure, but the fact is that Code is pretty fucking difficult to categorize or simply attach some crap-hole label-tag to. Deal with it, a-hole. Now, where was I…yes, the "Mut" album. Songs such as "Contours" and "Affliction" are melancolic and solemn while pieces such as "The Bloom in the Blast" and "Inland Sea" are slightly more progressive and experimental. In other words, the album is varied in terms of moods and atmospheres, which ensures that "Mut" as a whole never becomes boring or tedious to listen to. The vocals could have been a bit more varied in places as that would suit the dynamic and shape-shifting nature of the songs better, but all in all I must say that each and every member of the band delivers the goods.

"Mut" is highly recommended to the open-minded listeners out there who do not give a flying fuck about conventional song structures or so-called rules of how great and moving music is meant to sound or come across. When it comes to fascinating, captivating, and experimental music, "Mut" is the real deal!