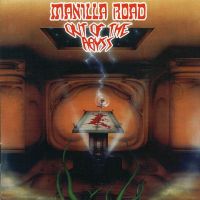 MANILLA ROAD – Out of the Abyss

‘Out of the Abyss’ was originally released in 1988, the 7th full-length album by Shelton and crew. With its thrash influences, it remains one of the fastest and heaviest things they have ever released, although the sound and everything else is as you would expect from Manilla Road. Although many people talk about the ‘golden age’ of Manilla Road (which supposedly ended a couple of albums before this one), I have always found them to be a consistent lot and this is as good in places as anything the band released prior to it.

So, the short answer is – if you are already a fan of the band but don’t have this disc, then this might be a good time to pick it up. If you are a newcomer to the band then why not start here? It is a great record!

For this release Shadow Kingdom haven’t added any extra tracks. I would have welcomed ‘The Book of Skelos,’ which was originally written for this album, as an extra track but that was not to be. No change to the packaging etc, but that isn’t a problem for me – after all it is about bringing the tracks to a new audience of those who missed it first time around…