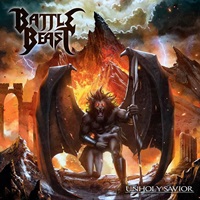 The third album from Battle Beast, "Unholy Savior" comes at a time after decent touring opportunities opening for Nightwish and Sonata Arctica across mainland Europe as well as performing at numerous festivals like Loud Park in Japan, Wacken in Germany, and Tuska in their Finnish homeland among others. Poised for headlining status, the 11 tracks once again circle the troops in a hook-oriented melodic power landscape – reference points set high on uplifting vocals and harmonies plus a musical framework that has just as much emphasis on keyboards as it does guitars.

"Lionheart" opens the record in double bass anthem fashion, the gang oriented chorus channeling visions of Hammerfall while the semi-gallop riff and addictive Anton Kabanen/ Juuso Soinio axe harmony is in line with their love of Accept as well as Sonata Arctica. Another track aptly titled "Speed and Danger" has that fire and brimstone attack that’s been missing from the Judas Priest and older Chastain days, Noora Louhimo screaming her heart out like the best traditional singers in the business. Other songs possess that in your face lyrical outlook and matching musical tricks of the trade to become future favorite when taken in live – "Madness" and "Far Far Away" probably two of the best on this record, the latter just settling into this comfortable groove as the guitars rock away the riff and the chorus mandatory for shouting at the top of your lungs.

To add a little variety to the mix, Battle Beast understand the need to stretch dynamically and write a couple of tracks that separate themselves from the pack. For "Unholy Savior", the easiest reference to this would be the dance-oriented 80’s cut "Touch in the Night" that will probably send shockwaves to some but could gain commercial acceptance, as I hear ABBA and Amaranthe inflections especially through the smooth melodies and infectious Janne Björkoth keyboard parts. The ballad closer "Angel Cry" gives the listener a chance to reflect upon this 44 minute effort in a quiet manner, as I believe the band has really stepped up their game by sticking to their strengths: smart, basic traditional riffing wrapped around equally enchanting vocals, the hooks and grooves solid for audiences to savor.

Starting off 2015 right, this will be one of the early essentials releases to own in the melodic power metal genre.