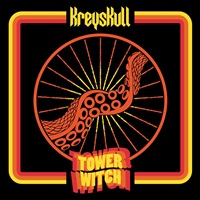 "Tower Witch" is the second full-length album from this Finnish band Kreyskull – a foursome intent on delivering some heavy doom oriented rock ‘n’ roll, throwback 70’s style. The band has a distinct manner of jamming sometimes on dynamic, quieter sections – making the heavier parts that much more impactful once they kick in. "Abomination Jungle" has this bluesy side shuffle that careens headlong into Trouble-oriented riffs, almost as if the band engaged in a steel cage match with ZZ Top.

Vocalist Kari A. Killgast possesses an eerie vibe that works wonders for the bands downtrodden philosophy – almost as if intertwining early Rob Halford and possibly Bobby Liebling from Pentagram. Best examples of his entertaining delivery include the semi-acoustic "The Man Who Lived Before" that features a cool bass break from Pasi Hakuli and a slower but equally exciting lead break from Saku Hakuli and the swinging "Evil Absolute Blues" that would make all Iommi and Blackmore fans beam.

Kreyskull doesn’t emphasize a stoner atmosphere as much as straight ahead 60’s / 70’s psychedelic rock – which makes this very hook / melody oriented and easy to get into from the first chords of "Night of the Waking Octopus" to the final drum hits on "Kingdom Falling". In comparison to their 2012 "Year of the Octopus" I feel like the band benefit from a bigger guitar tone and brighter production values – which could help them maintain a sense of originality in a genre currently on an upswing. I don’t even mind the obvious "Sweet Leaf" plagiarism Saku uses in their own title track – because the other elements of this 6 minute plus arrangements give off a different cultural feel than Black Sabbath’s original.

41 minutes of music, "Tower Witch" should push Kreyskull even further in their doom rock domination quest.