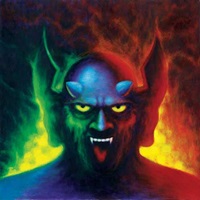 Traditional heavy metal has always lurked underneath the surface of whatever appears to be the new ‘hot’ trend in heavy rock/ metal. You can be evil, extreme, the fastest or sickest, but in the end bands like Mercyful Fate, Iron Maiden, and Black Sabbath remain timeless – and will continually inspire younger musicians to develop their own take on these primitive roots. Finland’s Mausoleum Gate are another five-piece who throw their horns to old school metal, spending a few years developing their chops through demo, single, and compilation releases before this debut album hit the streets.

Even though their self-titled record contains only 6 songs, two of them are epics at 8:58 and 11:36 timeframes, so prepare to invest in full ideas and opportunity for these musicians to jam much like their heroes of the 70’s and 80’s. You’ll get deep Hammond organ chords, psychedelic wah wah guitar action, and equally mysterious vocal passages that make "Lost Beyond the Sun" an early favorite -channeling Rainbow, Deep Purple, and Mercyful Fate in this very intense arrangement while bassist Wicked Ischanius and guitarists Kasperi Puranen plus Count LaFey court each other during the prolonged instrumental section in an epic dance. At other times the band is a little more up tempo and NWOBHM oriented – as Saxon and Raven come to mind when you take in "Mercenaries of Steel", especially in the higher range vocals from V.P. Varpula.

By mixing up their material from the down and dirty anthem "There Must Be Demons" to the closing, slow building epic title track, Mausoleum Gate showcase a band that isn’t afraid to explore all facets of classic heavy metal – be it harmonic, melody, groove, or feel driven. Even though the cover art isn’t my cup of tea (it looks a little amateurish in comparison to the music), luckily I didn’t choose to judge solely on that impression.

I can see a cult appeal that may grow album to album for this band.